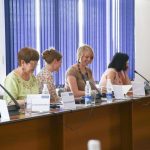 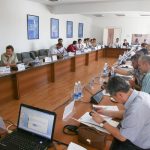 Between 3rd and 5th June, the OSCE Academy in Bishkek hosted an international conference organised jointly with UK-based researchers working on the ESRC-funded project Rising Powers and Conflict Management in Central Asia. The conference drew together panellists from cities around the world including Odessa, Tashkent, Florence, Bonn, Kabul, California, Tbilisi, Birmingham and Bishkek, each of whom presented their research on various aspects of peace, conflict and security in their chosen geographical region. Many of the papers addressed the question of why peace prevails in some locations in this generally conflict-prone region, but not in others. Other papers evaluated new and innovative means of conflict prevention. Still others gave in-depth ethnographic accounts of social processes in post-conflict environments. Together, the papers showcased some of the fascinating, diverse and cutting-edge research that is being conducted around the world on this hitherto understudies region. 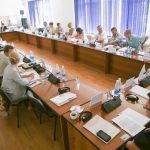 The conference began with opening words from the Director of the OSCE Academy, Pal Dunay, who painted a stark picture of the contemporary geopolitical situation in Central Asia, lodged between two ‘rising powers’ and with decreasing Western interest in the region. Building on this, two of the conference organisers, John Heathershaw and Catherine Owen, suggested that the region might usefully be considered from both post-colonial and post-Western perspectives in which the aftermath of the Soviet empire and the declining influence of the West provide the context of conflict, security and peace. 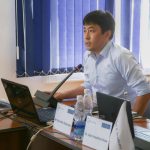 The first panel compared local processes of peace in Tajikistan, Afghanistan and the Tajik-Kyrgyz border. Khushbakht Hojiev demonstrated that peace in Jabbor Rasulov, Tajikistan, is sustained through local patrimonial authoritarian relations, and argued for greater engagement by the scholarly community with local, non-liberal approaches to peace. Timor Sharan presented a political-economic network approach to peacebuilding, arguing that liberal peacebuilding methods are less important in post-conflict Afghanistan than the networks that have come to comprise the state regime. Meghan McCormack’s legal ethnographic work exposed the tension between ethnic and national conceptions of community and demonstrated that the delineation of common land into national borders is a key driver of ethnic conflict. 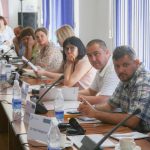 The second panel addressed new methods of reconciliation. Alison Mandaville recounted her work conducting creative writing workshops with Azerbaijani women, detailing how it gave the women means to express their experiences of conflict in a safe environment and thereby laid the groundwork for reconciliation. Nino Lotishvili presented the results of her research into instances of mixed ethnic marriage between Georgians and Ossetians, and claimed that it presented a model upon which broader relations between the two ethnicities could be constructed. Finally, Alexey Kruk of Saferworld, standing in for Arzuu Sheranova, who was sadly absent, detailed the organisation’s community policing initiative in southern Kyrgyzstan. 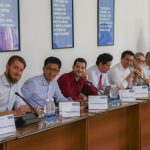 Day Two began with a panel on the interconnections between international norms and local practices of peace and conflict. Urban Jaksa gave a fascinating overview of the unrecognised states in Eurasia and pointed to their dual roles as passive contested territories and active polities with the goal of preserving their sovereignty. Philipp Lottholz argued for a conceptualisation of non-Western practices of peacebuilding in Central Asia as neo-authoritarian due to the hybridisation of liberal and authoritarian practices, and questioned their emancipatory potential. Catherine Owen explored Central Asians’ perceptions of Russian and Chinese influence in the region and demonstrated that, contra conventional Western wisdom, it is Russia that remains hegemonic in Central Asia. 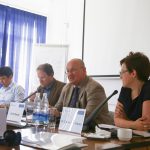 The fourth panel of the workshop explored the intersection of the politics of nation-building and ethnicity. Valery Khan gave an interesting statistical overview of the ethnic make-up of Uzbekistan and the extent to which different groups are integrated into the dominant culture. Jeff Sahadeo explored possible avenues through which a pluralistic agenda could be advanced in Kyrgyzstan and suggested the genocide of 1916 might be one starting point for different groups to explore a common history. Maryna Vorotnyuk considered the case of the Crimean Tatars in the recently annexed peninsula and argued that their safety has thereby been jeopardised. Ablimit Baki Elterish described the policies of the central Chinese state towards the Uighur population in Xinjiang and suggested that instead of quelling separatist anti-Chinese sentiments, they might instead have the reverse effect. 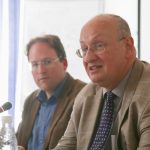 The afternoon session on Day Two consisted of an interactive creative writing workshop led by Alison Mandaville, who gave participants a taste of the kind of work she does with women in Azerbaijan. The two-hour session was an enjoyable break from the intellectual panel discussions, and participants were able to create their own poems from sections of their academic papers sent round in advance of the conference.

The final day began with a panel on the ethnic violence in Osh 2010. Aksana Ismailbekova shared her research into marriage patterns in the wake of the violence, showing that early marriage is frequently seen as a safer option for girls who might otherwise be assaulted and thereafter considered unmarriable. Joldon Kutmanaliev explored local peacekeeping initiatives in the town of Uzgen, near Osh, which managed to remain peaceful during the crisis, demonstrating that interethnic trust built on shared rituals such as feasting was key to avoiding violence. Alisher Khamidov presented a paper co-written with Nick Megoran in which he explained why certain ethnically-mixed towns in southern n Kyrgyzstan, particularly Aravan and Uzgen, avoided widespread violence. Lastly, Saniya Sagnaeva, in an auto-ethnographic account, discussed some of the challenges in conducting fieldwork and highlighted the importance of rumours in fuelling tensions in Osh. 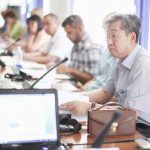 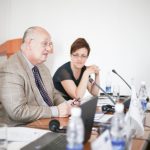 The last panel of the conference dealt with the issues of borders and territoriality as drivers of conflict. Karen Wykurz shared her experiences of working in southern Kyrgzstan with NGO, Saferworld, arguing that communication often broke down between the NGO and its local partners due to insufficient attention to the difficulties of life in a borderland area. Mkhitar Gabrelyan gave a historical overview of daily life in the Armenian village of Koti, located at the border with Azerbaijan, showing how discourses of nationalism in the village had changed over the years. Anna-Barbara Heindl presented her early research on youth perceptions of borders in Kyrgyzstan, demonstrating how in a generation, the state practice of bordering which was once alien is now deemed ‘normal’.

The conference closed with a final plenary session which, after opening remarks by Nick Megoran, Kemel Toktomushev and David Lewis, expanded into a whole-group discussion about, firstly, how to make the kind of deep ethnographic work presented at the conference more relevant and accessible to policy-makers and, secondly, how to ensure that scholars based at local universities were better represented at such events in the future. Regarding the first point, it was decided that more NGO representatives, journalists and even government officials could be invited to conferences. Regarding the second point, conference organisers recognised the need to make a (still) more concerted effort to ensure that scholars based at national, public universities were included in the programme.

Participants and organisers are now working on an edited volume which will comprise some of the papers presented at the event. Watch this space for more details! 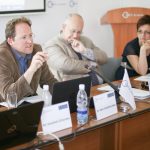