For over two decades, the Uzbek-Tajik relationship has been marred by tension, but a recent bilateral visit may mark a true thaw. 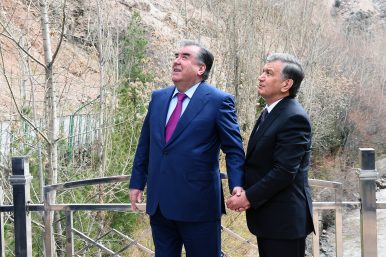 Uzbekistan’s President Shavkat Mirziyoyev visited Tajikistan on March 9-10 for the first time in his inaugural term in office. During the visit, he opened up the possibility of dropping longstanding objections to the construction of a large hydropower plant near Dushanbe in a landmark event that could now shape a new path for regional relations in Centra Asia.

Relations between the two countries, and especially between former Uzbek President Islam Karimov and his Tajik counterpart Emomali Rahmon, have been tense for more than two decades, due to Uzbekistan’s support for one of the “losing sides” in Tajikistan’s civil war, from 1992 to 1997. Rahmon, who emerged as the winner of the internal struggle for power, showed disappointment for Tashkent’s lack of support, while Karimov strongly opposed the rampant leader of Tajikistan.

Enmity between the two presidents also meant cold bilateral relations, harsh diplomatic spats, and tense exchanges in border areas. While the demarcation of the borders remained – and remains – incomplete, at the beginning of the 2000s, Uzbekistan lined several portions of its geographic boundary with Tajikistan with thousands of mines. After Rahmon revived a Soviet project to build a dam and hydroelectric power plant in Rogun, not far from the capital Dushanbe on the Vakhsh river, Karimov showed firm opposition, saying the project could endanger the flow of the main rivers from the Pamir mountains down into Uzbekistan’s cotton fields. The upstream-downstream argument became a routine comment in official exchanges between the two countries.

Karimov had only visited Dushanbe twice during his presidency, in 2008 and 2014. In both instances, the visit was defined within the framework of the Shanghai Cooperation Organization and not for a bilateral meeting with Rahmon.

After Karimov’s death in the summer of 2016, Mirziyoyev chose a diplomatic path focused on Uzbekistan’s immediate neighborhood. His first official visit abroad was to Turkmenistan, the most isolated country of the region. During his first year in office, he visited all the other Central Asian countries (some multiple times), with the exception of Tajikistan.

The unexpected turn in Uzbekistan’s diplomacy towards Tajikistan was symbolically exemplified by the informal go-ahead that Mirziyoyev gave Rahmon regarding the Rogun dam and hydroelectric power plant. Besides funding, experts regarded Uzbekistan’s opposition as the main obstacle and risk for the success of the project, which is being built by Italy’s Salini Impregilo through a US$3.9 billion tender.

“Geopolitics is the main problem for the project. If Uzbekistan continues on its hardline opposition, its completion could be jeopardized,” a member of the Italian diplomatic community in Central Asia said in an interview last summer.

The exchange between Mirziyoyev and Rahmon at their meeting in Dushanbe had all the characteristics of a gentlemen’s agreement, as they kept reassuring each other that they would not interfere with water flows or disrupt regional cooperation on water issues.

“We welcome Uzbekistan’s support for the development of hydropower facilities in Tajikistan, including Rogun,” Rahmon said.

The decision to ease pressure on Tajikistan could benefit Uzbekistan. Tashkent and Dushanbe are in fact in talks to resume electricity trade after more than a decade. Tajikistan’s state-owned utility Barqi Tojik said it would sell 1.5 billion kWh of electricity to Uzbekistan in April–September 2018.

The renewed trade could redefine electricity exchanges in the region. Seasonal shortages and lack of access to fossil fuel have hindered Tajikistan’s domestic supplies for decades. The opportunity to sell excess electricity generated during the summer to Uzbekistan and to import much needed power during the winter could finally improve Tajikistan’s ability to keep the lights on all year round. Additionally, an export route to Uzbekistan could bolster the financial and geopolitical sustainability of Rogun.

Mirziyoyev and Rahmon posed with wide smiles and warm handshakes during each of their encounters in the past year. Now it remains to be seen if the two leaders will follow through on their promises and really turn Uzbek-Tajik relations around.

This article was first published in The Diplomat, 12 March 2018